[Results] Are Classes in Your Toolbox?

Towards the end of 2009, we started a new survey of higher ed web professionals to take a look at one potential way that you are using the resources around you. The question centered on a fairly simple, central concept: odds are that on your campus you have classes teaching the creation of different kinds of media, are you leveraging them to add media to your web site? I have to admit the response surprised me. No. No you aren’t. 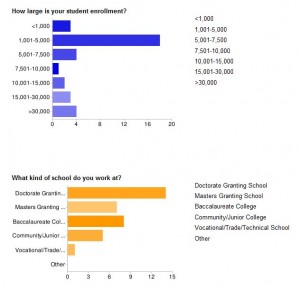 Before I dive too far in to what we learned, let me be transparent. I personally don’t feel we got enough responses to be statistically significant beyond the general answer of no. A total of 42 of you answered the survey, half of those were from schools between 1,001 and 5,000 students. Rather than throw away the survey, I do want to share some of the points that I think were of value. Just keep in mind the reality of some of this information might differ from the snapshot we got, so use care if you want to make a case for something and are citing this survey.

Despite the low return on responses, only 5% (2 people) said they do use content generated in courses on their site. That left the remaining 95% in the no column. No matter what, that to me was telling. It would definitely appear this is not a resource you are tapping, and that surprises me. However, out of those that said no, 44% said they had in the past, and 69% said that they would consider it in the future (that number goes up to 97% when including the ‘maybes’), the biggest barrier (34%) being inter-office communication. It would largely seem that the primary reason people aren’t doing this is that no one is getting together and talking about it. Concerns like the quality of results can be addressed if people got together and talked. But, that was barrier number two - according to 31% of you, you just don’t have a department on campus to talk to about this kind of content development, even if you wanted to. Obviously that’s a harder problem to solve.

The reason I started this survey is because it’s a concept I’ve talked about a little with some faculty on our campus. We have interest, we just need to coordinate the effort. As a university, it seems like from an academic standpoint we have at least some obligation to help kids get their feet wet in this environment. That doesn’t mean letting them redesign the home page, but why couldn’t they help with a student landing page, or marketing efforts? We let television kids produce shows on cable, journalists and photographers are printed, and broadcasting majors make commercials for local radio stations. Yet those interested in the web appear to be given no real chance to interact in a live market. I find that very interesting and a little sad.

From the results, here are a couple good comments folks made:

“Using student work is just too hit-or-miss and you have to use what they make or no one will want to do the projects for you next time. It’s like having a contest and using whatever you get in contest entries. You might get lucky, but more often you don’t because it’s a conflict of interests. The students’ objective is to learn the medium and get a grade. The university has marketing goals that don’t necessarily align with the class academic goals. Bottom line is, it looks like amateur work and that’s not the image we want to give in our marketing.”

What do you think, is this right? What if you used higher level courses with clear content objectives directed by the teacher? If quality was your biggest concern, it would seem clear communication and planning could help with addressing that.

“Our faculty are many years behind on technology, even our computer science instructors.  It makes it hard for students here who know more than they do.  They seem really afraid to even try anything new.  They also seem to not even want to continue learning - just waiting it out to retirement.”

This is a more difficult, broad issue. How do you teach the best without the best teachers to begin with? This is one reason I advocate using our positions in higher ed to also be teachers when possible, even if it’s just a night course.

So, what can we learn from this? Well, if you aren’t using courses on your campus to generate campus, you are in the overwhelming majority. If it interests you, work on communication. Don’t be afraid to talk to people about ideas you might have, someone has to start the dialog after all. A lot of people are willing to entertain the idea, so don’t ignore the value this approach to content development might provide for you. Better still, if someone comes to you with the idea be sure to vet it properly. Good ideas for web won’t always come out of your office.

3 Responses to “[Results] Are Classes in Your Toolbox?” 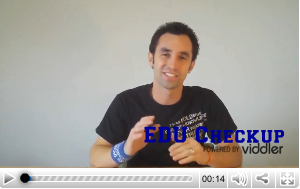